It’s good that your wrappers on plugs are biodegradable plastic, but are you working on your suppliers/associates too? 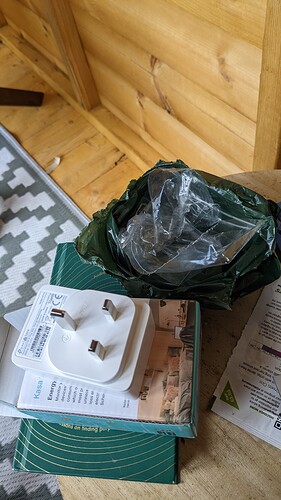 Hi @John_Thomas, this is going to be quite tricky as an early stage startup, we’re probably one of TP-Link’s smallest customers. And we are acting solely as a reseller when we sell you their plugs.

But we can definitely mention this with them and see if this is something they have in the pipeline (they should!).

Would be great if you can contact them about this too! (They’re quite active on Twitter https://twitter.com/TPLINKUK)

Got another one for you.

Probably even more tricky to get TP-Link to look at.

I have a load in the garage that includes a security camera and auto-mower that takes the load up to 100W while charging. The load includes a 6W homeplug network adapter.

It would be fine to have the entire load switch off in an Equivent, but getting the KP115 to switch back on requires it to be on the network. (Which went down when the Equivent started.)

For the moment, I have the KP115 on the load side of the homeplug, leaving the 6W load there full-time regardless of Equivents.

Fixing this might require having the KP115 capable of switching the load on after a defined period. Or something else…

I have several homeplug adapters. Only the one in the garage definitely has no WiFi if the local homeplug goes down. Maybe this is just a “1st world” problem and 6W is too small to worry about… but there are probably millions of similar devices in use across the UK.

This is actually something we already do, as a fallback we set timers to turn the devices on at the end of the equivent. So it would work even if they’re not connected to the network.

You can verify this by opening the Kasa app when an event is running and checking the devices for timers.

Oh, that’s great, thanks. I’ll give that a try then…

I could swap things around, but I think I’ll set it up as you describe and check it’s come back afterwards.)